We were up at 6:15 to try and get an early start so that we would have time to visit Georgetown, SC and still make Charleston tomorrow in the early afternoon.

We awoke to a cold boat.  I thought the generator ran out of fuel, but actually the heater broke.  Can you say Brrrrr?

We had the current with us and made Georgetown in an hour and a half.  We got gas at the first gas dock and the staff there apparently did not have their coffee yet.  They lacked any sense of southern hospitality.

We moved to the town dock to tie up and go for a walk.  We came upon the Ship's Booty in the 'Mall' as they call it. The owner's husband opened early and we had a very nice chat with him.  Bonnie found a few cute things.  We ate lunch at the Big Tuna by the dock.  They had a special of steamed oysters. It was a large tray of clusters of oysters.  It took me an hour to eat them all and my hands got a good workout.  They were very fresh.  Bonnie had the Grouper sandwich with well done fries (Thanks Arnon and Nancy for the well done suggestion).

Entering the harbor, and leaving, Bonnie donated some old bread to the gulls.  It was quite a show.

We had a mixed current the rest of the way.  We came to Leland Marine and looked in their creek for a place to anchor.  It was too tight.  We passed a guy on the dock and asked how much they charge for the night. We are pretty sure he said $6 a foot.  Probably not, but we took it as a sign to keep moving.

We anchored near whereMark Doyle had a good anchorage listed in his cruising guide.  It was quite and beautiful.  Probably the most beautiful so far - and that is saying a lot.

I dropped the dink and did some fishing.  No luck.  But I got some great photos and video of the boat at sunset.

Bonnie made Scallops Provincial for dinner. It was incredible. But that's what dinner is most every night with her.

Bonnie will be baking a lot tonight to heat the boat.  :-) 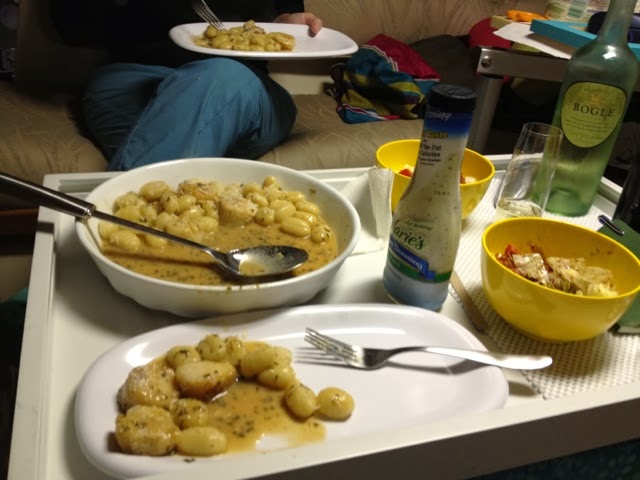