The same group of friends that planned the Croatia trip a couple years ago, planned a trip on a canal boat in southern France for this summer.  Bonnie and I had never been to Paris, so we added a few days at the beginning of the trip to see Paris before heading south to meet everyone else and get on the boat.

June 7 - Heading Across the Pond

We enjoyed having Premier Coach seats on the flight.  The Travel Agent was able to get them for us at no extra charge.  The food was quite good and it proved to be a great start to our vacation. We should have tried to sleep more, as we were really dragging when we arrived in Paris at 5am local time.

We pondered immediately immersing ourselves in French Culture and taking the Metro, but I quickly thought otherwise with our bags. Bonnie would have taken up the adventure though. We got a cab to the hotel.  The cab driver seems confused, not sure if we knew if we were asking to be dropped at a Hospital.

The Hotel Hospital staff were not yet in, and we had to wait on a stone seat until 8am. The old marble benches that have seen many a patient were not comfortable at all.

The rooms were spartan at best, but the location was perfect and the price was probably the best in Paris. The shower/tub had no shower curtain and the hose was short, even for short people like us.

We got a bit of a rest and cleaned up, then went out for lunch.

We crossed the bridge to the Northeast and a block off the waterfront found a nice place.  We had escargot and fois gras (the pate version).  The escargot was good, but in a lighter olive oil and herb mix, rather than the butter we have at restaurants back home.

We found a double decker tour bus stop and bought a couple tickets. As we were later in the day, it was good for also for the next day. 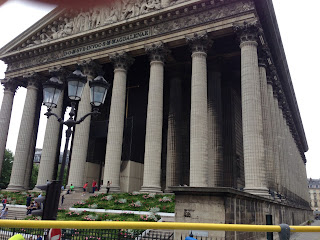 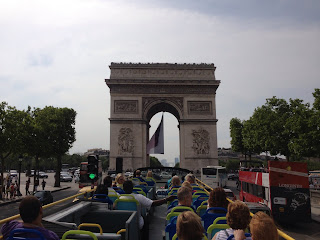 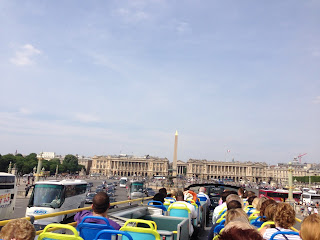 We rode the green line around from the Louvre, to the Eiffel tower, and Parliament buildings.  We jumped off at Notre Dame, where we were staying.

We went to a nearby restaurant on Isle de Citi and had lamb shank and Seafood Risotto.  It was good, and the wine was very good.

We crashed early, and even the very hard beds didn't stop us from sleeping.

We got up late and were moving quite slowly.  We felt like we had slept on the floor.   The weather was a bit rainy and breezy.  We wondered out for food and ended up with Bonnie getting Escargot again (this would become a trend) and me getting a Quiche.  Both were great. We had wine with lunch.

The jet lag was certainly having its effect, but wasn't stopping us from enjoying Paris.

We jumped back on the tour bus line and this time took a different route. 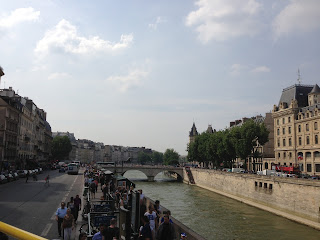 We had not planned an Eiffel tower trip in advance, and looked into tickets.  This would normally be a very long wait, but as it was not yet fully into the tourist season and was cold and rainy, we took the Metro Orange line and had a short wait for tickets. The tower was just as great as we had read about.  We got many photos and video.  While waiting for the second elevator to the highest level we met two couples from the US.  One of the guys did Motorola contract work and we knew some of the same people.  Small world.

We walked about 2/3s of the way back.  We stopped at a few restaurants along the way, but all were closed as it was Sunday and it was off the tourist track. We found a small open restaurant and had dinner.  The escargot was in a cream sauce with herbs and oil as a separate layer.  It was really good. They also had a fantastic Cappuccino. The wine as great again.

We exchanged emails and Facebook posts with friends, kids and my brother.  My brother and his finance were also in France combining a work and vacation trip.  He warned me that the Air Traffic Controllers were planning  a strike and was not sure how broad the effect would be.

We crashed about 11pm, which wasn't going to help the jet lag.

We slept in again, and were slow getting moving.  There were long lines at Notre Dame and we decided to have a late breakfast of coffee and a croissant.

We walked to the pharmacy and also a post office, so that Bonnie could mail a letter she had been carrying on her since we left.  We pasted a shoe shop and stopped in on the way back.  Bonnie found a cute pair of shoes and I purchased some odor free insoles.

We walked back past the tower that Pascal used to measure changes in air pressure, and from that invented the barometer. We also walked to Pont Nerf and down around some of the dinner cruise boats.  Bonnie had found the Calife on Trip Adviser the night before, so we called and made reservations for a romantic dinner.  It was a smaller boat, which was a remodeled antique and very pretty.

We had lunch and did some souvenir shopping, then took a break before heading out to the dinner cruise.

The Calife was great. The wine, food, and tour route were all great.  We went up the Seine for a kilometer or so, then turned around and went down it, past the Eiffel Tower and copy of the Statue of Liberty.

We then turned around and came back to Pont Norf, where we started.

We arrived back in at the hotel and got on Wifi to confirm our flights for the next day, which we found were cancelled due to the Air Traffic Controller strike. We started looking at train tickets, but could not find a good site to order them from.  We called our travel agency, only to find out our travel agent passed away the week before from a brain clot.  The agent who helped us told us that a train was our best bet, but said she couldn't order tickets for us.  We finally gave up and went to bed.

We got up early to figure out our travel options.  We found a train that went straight through to Castlenaudary.  Bonnie ordered it on-line but it would not confirm the tickets.  We packed up and checked out. We took a taxi to the train station and went to pick up the ticket.  It wasn't there, and apparently the rail line was not allowing outside purchases due to the strike.  There were no tickets available for the morning train.  The 3:00 train went only as far as Toulesse, and we would need to try to get a local commuter train to complete the trip to Castelnaudary.

We decided to think about options such as a one way car rental, or something else, and did not buy a ticket.  Instead, we went off to the side and pondered it.

I walked to the rental car area to see what was available.  No luck.  We went back to the ticket window to buy the ticket.  This agent was better at English than the last one, and we explained our dilemma.  He was very helpful and found a red-eye sleeper from a nearby train station to Castelnaudary.  We bought first class tickets hoping for  a larger sleeping car.

The train was not scheduled to depart until 10pm, so we decided to take our luggage back to the Hotel-Hospital and see if they would keep them for us.  They did, and we went out for a walk around the town. We ate escargot and Rotisser (rottersisserie) pork.  We waked and shopped a bit, then went back to the Hotel-Hospital to chill and get our bags.  I got a short nap in the chair in the lobby, then we took the Metro to the Austerlitz station.

We still had a four hour wait for the train, so we sat at a cafe there, drank wine, and watched people go by.  Bonnie worked on translating the menu so she could learn some more French cuisine names.

The train was on time, and quite crowded. Our sleeping car room was for four people.  The other two men were nice.  One was a French Army Doctor travelling back to his base at Carcassone.  We tried to communicate as best we could.

It was a long ride.  We both tried to sleep, but didn't get much.  We still had not recovered from the red-eye to France, and three nights on a very hard bed.

We were not sure if we would understand the announcement for Castelnaudary, so we set alarms for 4:45a to have time to get our bags together.  The conductor did come in to wake us, but we were up and quietly slipped out with our bags.


Here is the compiled video of the four days in Paris.

I'll create a link to the Picasa site with all the photos from the trip.

Posted by Eric Epstein at 12:33 PM No comments: