The trip to Croatia was incredible.  The beauty of the architecture, cleanliness of the country, quality of the food, friendliness of the people, and the striking contrasts of limestone cliffs and deep blue waters, all made for a wonderful adventure.


We took many, many photos and about 9 GB of video during the journey.  We divided the video into sections to make it a bit less overwhelming.
All the photos, arranged by city are posted on Photobucket - http://s1177.photobucket.com/albums/x355/EricEpstein/HSA%20Croatia%202011/
Trogir
We arrived into Trogir by taxi from the Split airport. The town is an island that was once a walled city built in the 3rd century.  You can find the history here - http://en.wikipedia.org/wiki/Trogir

We had dinner at the Hotel Trogir but stayed at the Trogir Palace Hotel that night.  Many of the others in our group stayed at a hotel nearby.
The next day we took a water taxi to Split, the second largest city in Croatia.
Split


It was built about 200 BC and later the Roman Emperor Diocletian (305AD) built his palace there.   I can't do the history justice in a short summary, so here is the link to much greater detail - http://en.wikipedia.org/wiki/Split,_Croatia
The Palace was quite incredible and we had a wonderful tour of it from Maria our tour guide. 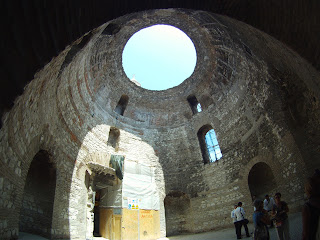 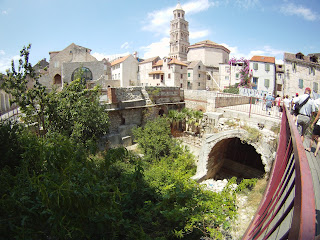 After touring Split, we picked up the taxi to the Sunsail marina in Kremek, checked out out our boats and then took a taxi to Primosten, a neighboring town, for dinner.  We slept on the boat in Kremek and bought supplies the next morning.
At about 10am  we cast off at headed to the island of Solta for our second night on the boat.
A summary of our first two days is on this YouTube link:
Solta
We arrived in Sesula Bay, Solta about 3pm.  We had thought they had a couple mooring balls for us to tie up to, but what was there were hybrid Med Moorings with long lines to the shore.  The restaurant tried to accommodate all the boats that arrived, and squeezed over a dozen boats on a set of moorings meant for perhaps six to eight.  It was quite a sight to watch the guy on the dinghy act as a tug to spread boats apart so more could fit in.

We ate dinner at the restaurant that supplied the moorings.  The food was very fresh and good and we had a blast.

We left Solta at 7am to get an early start for Hvar.  Our hope was to tie up downtown, but we were told it gets crowded early.  The winds were calm again and we motor sailed all the way.
Hvar
When we came around the turn from the channel into Hvar harbor, we were amazed at the beauty.  Even after seeing Trogir and Split, Hvar was quite a sight.
For a history of Hvar, go to http://en.wikipedia.org/wiki/Hvar_(city)
We decided to try to see if dock space was available on the main quay.  We came in between two large motor yachts - one of which had to be about 200'.  The harbor master let us in, and we and Komoa moored next to each other right on the main walk in front of the town.  It was really a blast to be there.  If we had not left Solta so early and arrived just about 10am, there probably would not have been any space.


That walk up to the fortress and back wasn't too bad, although it was pretty hot out.  Fortunately there were many nice Gelato ice cream stands in the town.
We had lunch in the main square and like all the meals we had, it was very good.  This time it was Italian food and the pizza dough was extraordinary.

For dinner, we dined at the Park Hotel's restaurant which had a great view of the harbor.  That night we walked around the streets and enjoyed the sights, music and people watching.

We provided the people passing with a short American musical compilation for the Fourth and had the boats adorned with red, white and blue banners.

Back on the boats, we enjoyed home made cheese cake dessert.  It rained late that night for a couple hours.

Here is a compiled video of Solta and Hvar.


Lastovo
We left about 9:30am to head for Lastovo.  It has a population of about 750 and is really just a small fishing village with a few restaurants. There is one dive shop as the surrounding waters boast an ancient wreck with urns still on the site, and a WWII German Torpedo boat. 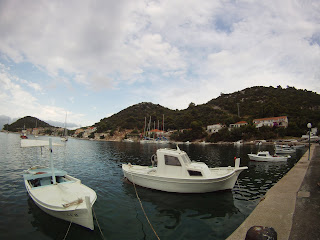 We tied up at the Restaurant/Bar (called Konoba in Croatian) named Augusta Insula.  They, like many waterfront restaurants in the smaller villages offer free mooring for the night if you eat in the restaurant. 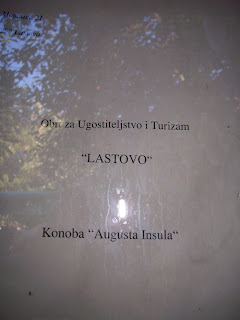 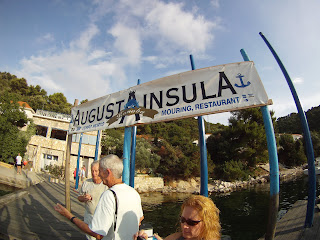 They were able to squeeze about seven boats along the waterfront docks at the restaurant.  Lobster, which was their specialty, was kept in traps on the dock.  Here is the link to Trip Advisor (http://www.tripadvisor.ca/Restaurant_Review-g1175144-d1529818-Reviews-Augusta_Insula-Lastovo_Island.html) on the restaurant.
We found the lobster pasta, octopus and everything else to be excellent.  The price was very reasonable and even with a 30 minute power outage to the entire island the dinner took only the normal three hours of a Croatian dinner. 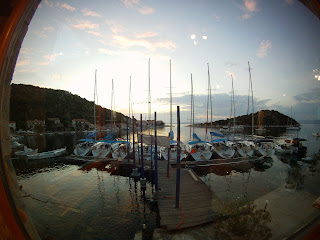 Korcula
We left Lastovo at about 9am and made the long run to Korcula were we had reservations at the ACI marina there.
We stopped at a cove by the Raznjic light, about 3/4 of the way to Korcula for a swim and to explore the shore.  The shoreline was like a moonscape.
We met up our friends on Komoa II at the marina. 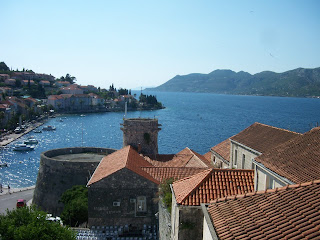 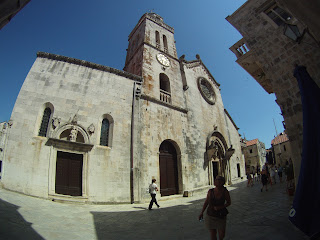 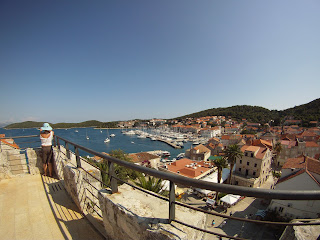 We found a large grocery store and a market in Korcula, so we stocked up on food, beverages, and some souvenirs.
Here is a compiled video of Lastovo and Korcula.
For more information on Korcula's history, here is the Wikipedia link: http://en.wikipedia.org/wiki/Kor%C4%8Dula
Pomena
We set out from Korcula about 10:15am as it was a short sail to Pomena.  We arrived a couple hours later at 12:45p at the restaurant 'Nine' (pronounced Ne na') which offered the customary free dockage for eating there.  Komoa II had beat us there as we spotted a large pod of dolphins and got distracted for a while.  We got some great video of them.
Komoa's crew was eating from a large pot of mussels and spaghetti.  So we felt inclined to order the same thing for the six of us.  The mussels came right from the bags hanging on the end of the dock by our boats.
BTW, all boats must close their holding tank thru-hulls when in port.  :-0
We hiked to the National Park to see the Fourth Century Basilica built as an island on one of two inland tidal lakes.  The hike was nice and the park was extraordinary.  We took a water taxi to the Basilica. 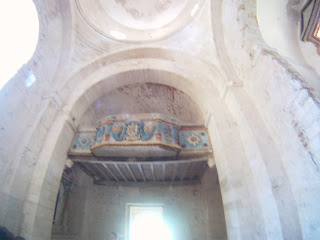 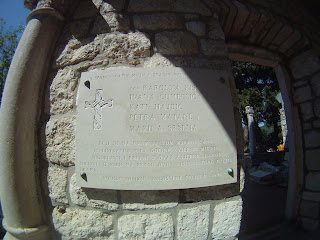 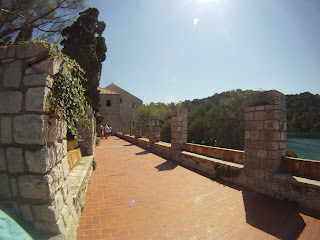 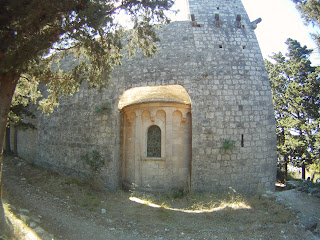 After the hike was all went for a swim off of the dock by the restaurants.  I did a bit of snorkeling which is on the video.

We combined ingredients with Komoa II and they made some great Painkillers which we drank before dinner.  We ate at Nine again and had a variety of wonderful seafood and pork dishes.

Here is the compiled video from Pomena and the cave on the eastern side of Mljet.

We left early from Pomena, about 7:15am so we could do a bit of sight seeing along the coast of the island of Mljet.  We were told the day before about a cave along the Adriatic side of the island.

We and Komoa found the cave about halfway down the island.  It was a pretty wild guess as to the spot, which Greg calculated from a topography map on his iPad that show the only walking trail to that part of the coast.

BTW, each of the two boats had an iPad and Navionics software on them.  I used it almost exclusively over the boats chartplotter as it could zoom in far more than the chip supplied with the boat's plotter.


We arrived in Lopud about 1:15, and after making a pass of the waterfront, found a place shallow enough to anchor.  The bottom of a small area off of the town is sand and grass about 45' deep.  The rest is rock and is over 100' deep.
We took the dinghy to town and walked around.  There were quite a few ferries on the docks, and many tourists.
We walked along the water front and up to the large fort/church on the north side.
Here is the link to more info on Lopud http://en.wikipedia.org/wiki/Lopud

Here is more on the hotel: http://www.lafodiahotel.com/


The town has no grocery store and does not allow cars, except for the trash trucks that come in by barge to collect garbage.

We had decided to eat dinner aboard to finish up all the food we had.  To start, we collected up all the rum and combined with what Komoa had, to reduce what we had to carry off of the boat.  The happy hour did not end until well after dark, and we never did get to dinner.

Lopud is a short hop to Dubrovnik.  We left at about 8:15am and headed directly towards the city.  Rather than go directly to the marina, we sailed by the city waterfront and by the harbor entrance to get a good look at the city from the water.

It was a magnificent site.  The large city rising above the Adriatic was huge and beautiful.


We spent the day sightseeing and took a lot of photos and video.  Our photos are on Photobucket at: http://s1177.photobucket.com/albums/x355/EricEpstein/HSA%20Croatia%202011/

We turned in the boat the evening before it was due and stayed on board for the night.  The next day we checked into the hotel and toured Dubrovnik again.  Bonnie made reservations in a very nice hotel with a great view of Dubrovnik.  To our surprise, the hotel was located adjacent to where the fireworks commemorating the start of the Summer Festival were to be held.  We ate dinner on the water front restaurant and watched the fireworks from the best vantage point I have ever had.

The partying in Dubrovnik that night was pretty wild.  When we woke up at 4:30am to get ready to head to the airport, the music and dancing was still going.

It was a tremendous trip and we had one of the best vacations ever.