For all PDQ owners, we are hosting a PDQ Cookout on October 9th in Annapolis from 5pm until 9pm. There will be food and drink, and you are welcome to bring your own additions as well. Go to the PDQ forum for more information, or send us a message. Hope to see you there.
Posted by DesertStar at 9:09 PM No comments: 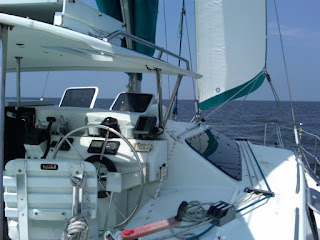 We finally got away for our honeymoon. With the house sold, bills paid, kids home, Ashley signed up for college, and the cat getting better after $2000 in medications, we packed the car and headed for the boat. 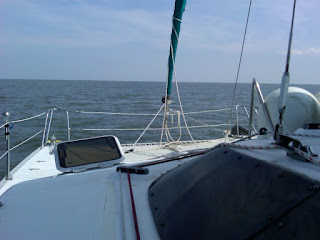 The weather was great, although there could have been a bit more wind. The trip up the Chesapeake was easy and we timed the tide well. The C&D was also easy as we anchored at the mouth of the Elk river and waited for the morning tide to take us through.

Oddly enough we found the restaurant and fuel dock in Chesapeake City closed. It looked as if it was being remodeled.

We got water at a marina father down and were fine on fuel to Cape May. 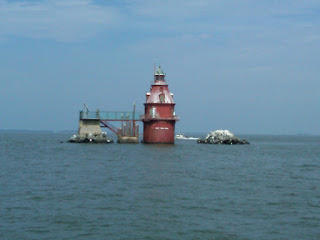 The Delaware Bay was the usual droll trip. Nice lighthouses and occasional pod of dolphins, but little else. 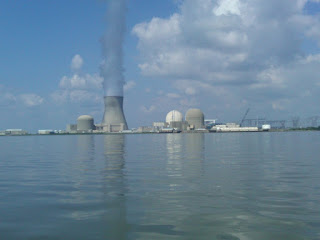 Its always a long trip and half of it is usually against the tide. 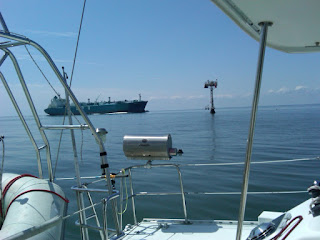 Ship traffic was much lighter than usual the entire trip. 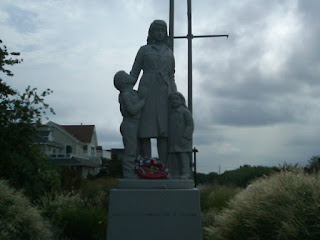 We arrived in Cape May, via the canal, late in the evening and anchored off of the Fisherman's memorial. I had not been to Cape May since 1978 and Bonnie had never been there. 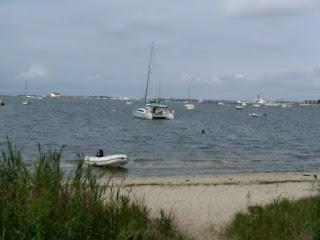 We were on the inside of a mooring field in 4' MLW. The perfect place for a PDQ to escape to. 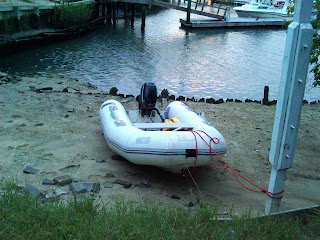 The tides were typical for Cape May, about a 5' change. The boat was fine as I planned for Mean Low Water (MLW), but access to shore gave the dinghy a bit of an exercise. I realize now why hard bottom RIBs are so popular. 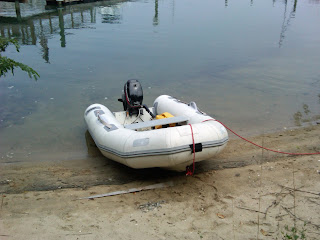 We met a couple that anchored nearby with a Gemini. They were finishing up a six year cruise in the Caribbean. They had a lot of ups and downs. It was great sharing some wine with them and hearing about their adventures. 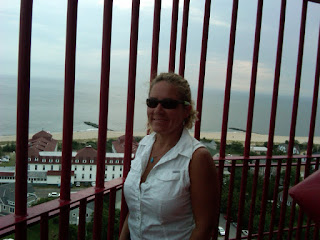 We walked into downtown Cape May, then rented bikes. We went to the Lobster House, toured the water front and shops, saw lots of incredible old homes and went up to the top of the Cape May lighthouse. We ended up staying two and a half days as the wind and rain one day convinced us that it was a great day to do boat chores. 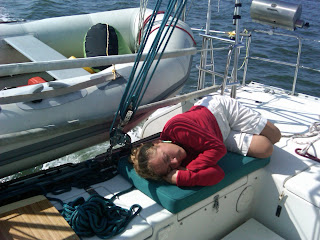 We purchased some fuel a Utsch's marina in the Jerry jugs. The PDQ did not look like it would fit in the fueling slip. The trip out of the inlet was great, and we spotted dolphins right at the entrance. There were 2-4 foot following seas and Bonnie's first ocean experience was a good one.

We rounded the end of the Cape between the shoals and beach and caught a Bluefish.

The trip up the Delaware bay was just as long as the trip down. We fought the tide for two hours then with the tide change, we made a good 8 knots plus most of the way and the entire C&D as well.

We got caught by the tide change running NW up into Harve De Grace. It took a while, but we were anchored by 9:30pm. My mind was blank as to where to anchor, so we decided to anchor directly off of the Concord lighthouse. 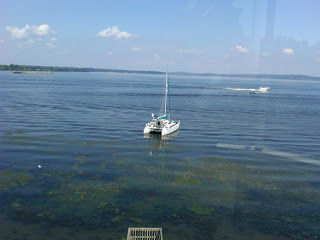 We had a nice tour of Harve De Grace the next day and also found an Art Fair there. The photo above was taken from the lighthouse. 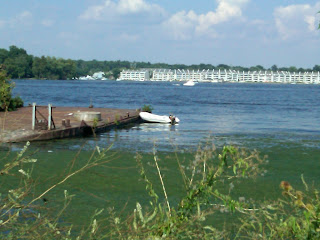 We really wanted some fresh fish for the grill, and found a place on Google Maps that was near the water. We had to tie up to an old barge and trek through a field to the store - only the find out it was a restaurant. But the people there were very nice and sold us some Rockfish at a good price. 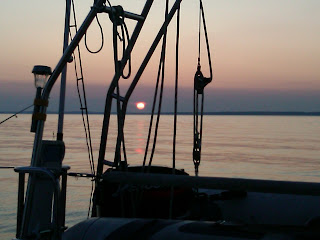 I BBQ'd the fish at the mouth of Bodkin Creek as the sun went down. We made it home the next day by 2pm. As we motored down the creek to the mooring Bonnie said she refused to grab it. She wanted to stay on the boat. But we bowed to the responsibilities of life and tied up. 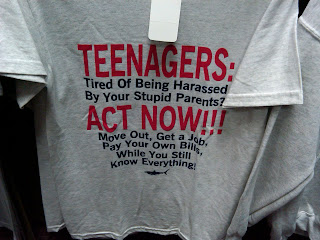 We did send the kids a good message from a shop in Cape May. And we learned that a week on the boat was easy. We are certainly ready for more adventures.
Posted by DesertStar at 8:52 PM No comments: