Similar to the trip south this past November, the trip home was not without events and a change of plans.  We had hoped to bring the boat home over a couple week period, and stop along the way to see a few sights we missed going south due to the weather.

We got to Charleston on Friday and prepped the boat.  It was in good shape and nothing was in a condition to delay us.  We spent Saturday at the farm market, buying some fresh veggies, raw milk, and fun stuff like pickled Okra.  Yes, oddly enough, I have developed a taste for pickled Okra.  We went to Hominy  Grill for dinner and had a wonderful meal.

Sunday morning brought winds from the north northeast at about 25 kts.  Of course that is just the direction we needed to travel.  The weather service said winds would be north northwest at 10-12 kts.  We had limited time, and as we planned to take the ICW anyway, set off.

The winds stayed with us for three days.  We had a lot of chop on the nose and the apparent winds hit 45 kts at times.  This video gives you an idea of what it was like.

High winds on the ICW

There were few boats out and the tides were lower than usual.  A large trawler ran aground in front of us and was stuck hard until a PDQ 34 Powercat helped pull him off a few hours later.

We had planned to make 12 hour days, if possible to try to get to Cape Charles for a Craft Fair on the next Saturday.  We didn't really expect to make it, but thought it might be good to see how far we couple get.  Renting a car to make the Fair was always on option.

Winyah Bay was very rough, and we entered it just as Bonnie has was serving dinner.  The broadside waves really tossed us around.  I turned bow into the wave for a while, even though it was not our intended direction of travel, so we could finish dinner.  That also got us to the windward side of the Bay and into a more sheltered run.

We made Georgetown at sunset, not a bad day's travel considering wind and currents.  We anchored as far back as possible, but the wind was still 18 kts on deck and 26 kts at the top of the mast.  But the anchor held well and we got a good nights sleep.

Bonnie had her perfect cappuccino ready before sunrise and we were off as the sun left a beautiful red ribbon across the sky.  The winds stayed just the same and we plowed through the waves for the entire day.

We stopped in for fuel in North Myrtle beach at saw the boat Windward, owned by a wonderful couple we met in November going south. I knew Bonnie wanted to make time and it was only 3 pm, but we were very tempted to grab a slip and stay the night to visit with them.  We regret that we didn't.  Any yes, we know well that old adage; that sailing trips should never be made with a tight schedule.

We anchored just before sunset in a small marsh on the edge of a channel, just shy of Southport.  The winds across the marsh were 30 kts and I was feeling unsure of my judgement in selecting the location.  But it was the best around and pushing it as we did, near sunset, gave us few other options.  Our great little anchor (here's where you get to laugh) an 18 lb aluminum spade with 25' of chain, held perfectly as always.  I have been lectured on our ground tackle many times, but many people of various skill levels.  But I have to say that it has held through many a blow and I swear by that little spade anchor.

Bonnie made her usual incredible dinner and we hit the hay for a early start again.  I must say that no matter what the weather, the rush, or other external troubles, Bonnie consistently creates the most wonderful meals for us.  I never cease to be amazed.

At sunrise we started off again, but it took a bit to get the anchor unburied.  It had set and buried itself quite well.  Once in 2010, in Cape May harbor we spent three days anchored in a nor'easter and it took over half an hour to dig the anchor out.

We passed Wrightsville beach bridge and the bride tender told us the Figure 8 bridge was broken and wont not be working for a few hours.  We figured we would get up there and then anchor or such.  The USCG Cutter Simlax that does all the channel marker work for NC and some of SC was among the parade of boats with us.  They radioed us to say they were going to drop their steel piling ,and become 'a pier', while they waited for the bridge.  I told them I wished I could do that, and they offered to let us tie up with them.  So we did.  We got a great tour of the ship and learned it is the oldest Coast Guard Cutter in the fleet, built in 1944.

Bonnie was quite impressed that a crewman was assigned 'catamaran watch' while we were aboard.  We had a nice tour and after about an hour and a half the bridge was fixed and opened for us.

We made the Cape Fear River, with wind on the nose again.  It was rough, and the tide was against us, as well as the wind.  I tried to motor sail for part of it, and we were able to get to 6 kts for about 1/3 of the river.  The rest was about 3.6 to 4 kts.  Needless to say it was a long trip.

Bonnie felt the salmon was not going to last too long, so she made it and roasted brussell sprouts for lunch. Pretty nice meal for a 'light lunch' in rough weather.

When we got to the cut, the current was in our favor and we made 8.5 kts through it.  Then we hit alternating patches of fast and slow as the tide and current was still rushing out of the various inlets we passed.

All in all we were making good time, until...

Do you now that horrible sound a garbage disposal makes when a spoon falls in it?  Well our starboard engine decided to start making that sound just before the North Topsail Beach bridge.  To make a long story short, the engine had never been quite right since we purchased the boat.  It occasionally burned oil, occasionally did not like to start, and just seemed to always need a bit more attention.  We had it fully serviced before we left and on the way south I checked the oil everyday.  It died on us once going south in November.  The Yamaha mechanic said its oil sensor was not connected and it was not running quite as it should.

We limped up towards Sneads Ferry, but decided to drop anchor for the night off of the channel.  It was quite shallow and took a bit to find a safe spot.  I played with the engine, and called my brother who used to be a boat engine mechanic.  I pumped the engine oil into a mason jar and let it settle.  With the flashlight shining on the bottom of the jar I was able to make out a variety of 'star constellations' in the hundreds of metal flakes sitting against the glass. It costs $2600 to rebuild an engine that costs $3000 new.  Hmmm.

In the morning we strapped the dinghy to the starboard side and ran with it, and the port engine, up to Sneads Ferry.

I called the Yamaha dealer there and they recommended the Swan Point Marina for tie up.  So we called them and they told us to come on in.

The marina owner, who has only had the marina since last July was wonderful.  She and her staff where great to us.  The marina is old and full of character (and characters).  We really enjoyed our time there.  Their main dock is a single, long floating dock that can hold 7 or 8 catamarans or trawlers.  Its too shallow for sailboats that draw over 5.5' of water, and even that is close at real low tide.  But their set up, with a Yamaha dealer just across the parking lot, is ideal for PDQs, the new Geminis, and Tom Cat catamarans that use Yamahas.

So the search for a new engine began after we tied up.  Unfortunately the spring orders for engines were already made by dealers.  The local dealer, as with most dealers on the Carolina coast, sell only larger engines.  A place in Oriental had one in stock, but it was a tiller handle version.

The PDQ owners have a great forum and Facebook page.  So I posted our dilemma on their Facebook page.  A few owners told us of a place in Michigan that many of the PDQ owners custom ordered outboards from. So I called and sure enough they had one left.  An Amex number and the marina address later, and a new engine will be there by next Friday.  The Yamaha dealer next door said he could install it while we were away.  We could not stay all week as I actually have to show up for work these days.

A call to Enterprise got us a car.  We actually were able to get a rental car for two weeks that we return to Jacksonville, for half of the cost of a one-way, for just a couple days.  So as we will be back in two weeks, we chose that option.  Then, being near Camp Lejune on a Friday, many marines rent cars.  All choose the lowest priced options, as did we.  So the young lady asked if we wanted a free upgrade to a mustang.  We were not sure, as Bonnie had boxes of crafts for Cape Charles.  But after we determined that it would all fit, we took the cherry red convertible Mustang.  I asked the young lady if she gave it to us cause we are the old folks and wont drive like the marines would.  She replied that I wasn't 'that old', but yes, that's why we got it.

We had a nice drive to Cape Charles, with the top up, as the car was full of Bonnie's solar lights.

Currently she is at the craft fair, while I went to the Barrier Island Museum and am not catching up on the blog and work tasks. 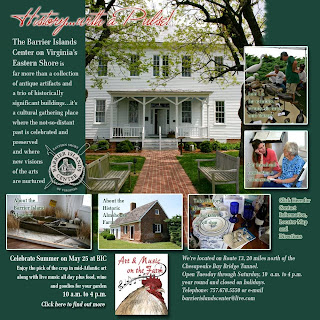 We hope to return to the boat in two weeks and move a bit farther north.  But this time, we plan to go slow and stop a lot along the way.  We have a few good friends that are just leaving the Bahamas, and hopefully with catch up to us.

Stay tuned for the continued voyage.