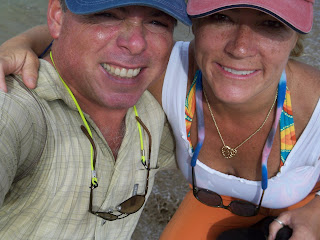 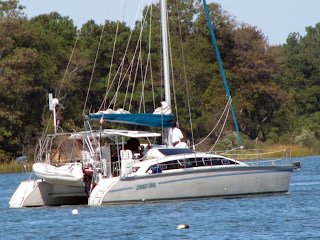 October 23 2008 – I was energized by the experience Bonnie had going to Reedville and wanted to get the boat to 10 kts. So we took her out on a windy Saturday. The winds ended up being a lot more than expected. We blew out both the main and jenny.

It was an expensive trip, but other than the sails, no damage to the boat.

You can read the full story on
THE LATEST PDQ NEWSLETTER

October 13 2008 – We did an overnight, continuous run to Reedville to give Bonnie an idea of standing watches.

We did 120 miles in 28 hours, only stopping for breakfast and a nap.

Denny accompanied us. It was a fun trip and a great test of the boat and its new owners. 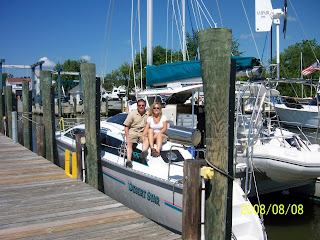 Bonnie and Eric at the launch of our new boat. 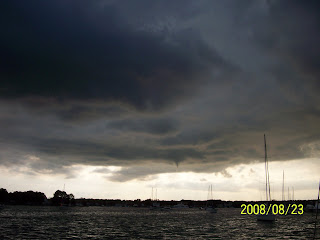 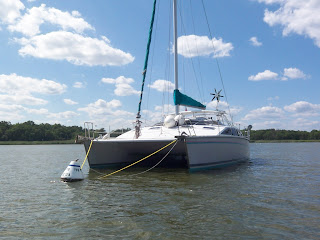 This is a recap of 2008 and before we moved to Blogger.com

August 2008 – Bottom painted, launched, shake down trips to , St Michaels, and Deal. Speeds to 8.8 kts. Saw a water spout in St Michaels. Carl was first overnight guest. Tyler and Robert did first night sail with us.

Bonnie enjoying the headroom in the galley. She purchased a convection oven which we need to make a stainless steel sleeve for. 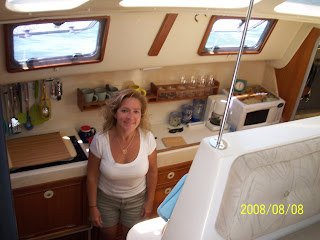 During August and September, we sailed around the area, St. Michaels, and Baltimore getting to know the boat.

We had an incredible time and got pretty good at handling her.

We now have to worry about overtaking other boats. That's sometime new for us.

Posted by DesertStar at 9:11 PM